Millennials currently make up the majority of Pinterest's community and are using this platform to search for things like home decor, apartment rental hacks, and even apartment lease questions. There is a huge demand for this type of content (and these brands ), especially with Gen-Y and Gen-Z opting to lease much longer than previous generations!

While Pinterest has been making waves since its launch back in 2011, its recent feature releases and continued community growth are what have us back on the front lines sharing just how beneficial marketing on Pinterest can be.

Apartment marketers take note and check out our ten compelling reasons below for why you and your apartment community need to be on Pinterest. 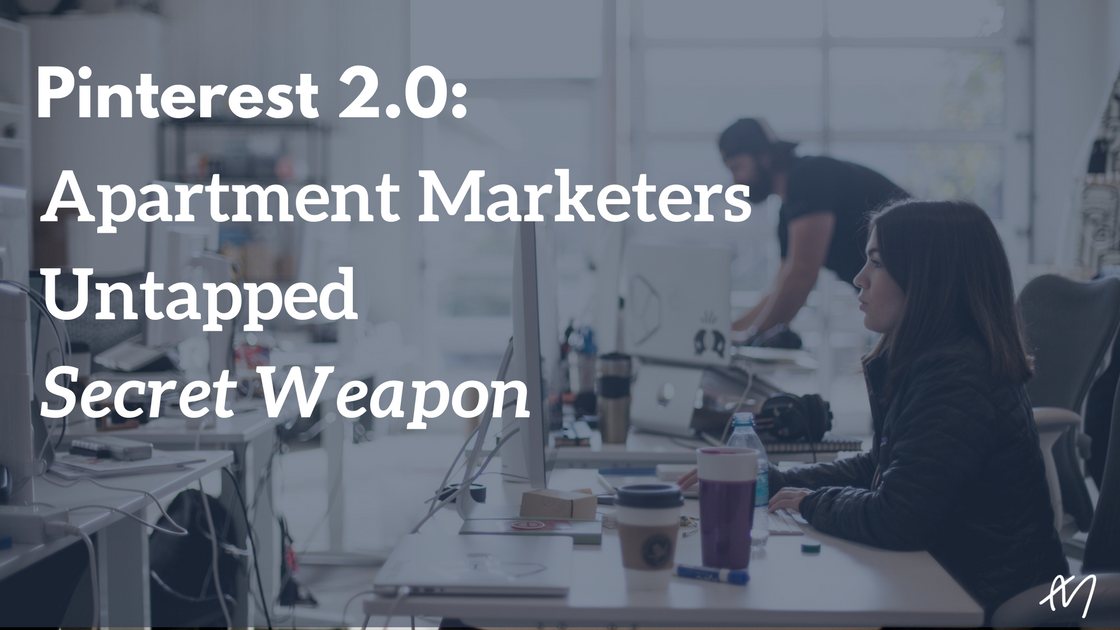 Let’s start with the big numbers: Pinterest has continually been named one of the fastest growing social networks and continues to prove that statement true year after year. Pinterest is a brand's dream come true with the platform built to be less concerned with who’s following you and more concerned with finding interesting things to share. We like it because this means no matter when you join you’ll still be able to see results quickly.

But let’s get back to that big number, 175 million active users. While it may be less than Facebook's or Instagram's user base, Pinterest has proven their audience wants to engage with brands and even routinely makes purchases (or signs leases) after coming into contact with that brand on Pinterest (more so than on Facebook!).

While women still make up the majority of Pinterest that is no reason to shy away! In a recent study by RadPad, they found that 45% of women surveyed will take the time to look for the perfect apartment, rather than settle like their counterpart. Why not put a little extra time into building up your Pins to capture this audience and show them your apartment can be “the one.”

2. Move Over Google; There’s a New Search Engine in Town

Expanded Ramblings recently released their findings that there are over two billion searches a month on Pinterest. Google is currently reported at having over 100 billion searches a month, but with 10 times the competition. Whereas on Pinterest there is less competition (unless you’re sharing recipes or DIY projects) and more room for you to get your pins ranking within the first two rows by simply optimizing your description (that’s right! A social platform where you can apply your vast SEO knowledge!)

Don’t worry; you won’t be flying blind when you optimize your pins. Pinterest offers a business account (for free) that tracks how your pins and keywords are doing and the traffic you’re receiving from those pins (something you should be sure to keep a close eye on!). There are tools out there, such as Pinterest Keyword Tool that give you suggestions on what to be optimizing for and what kind of content you should be creating.

Still not entirely convinced that Pinterest's searchability in on par with Google? Maybe learning that Pinterest recently hired 10 year Googler Randy Keller, previously a senior engineer who focused on image search rankings and features, to be the head of their search will put you at ease.

According to a study conducted in conjunction with Pinterest for Business and Ahalogy, it was found that 83% of Pinterest users were more interested in connecting with brands rather than with their favorite celebrity.  While users on Facebook and Instagram are also looking to connect with brands, Pinners are seeking out brands and not only repinning their content but purchasing their products!

“93% of active pinners said they use Pinterest to plan for purchases and 87% stated that they'd purchased something because of Pinterest.” - Omnicore Agency

Don’t be too concerned with fitting them into your demographic as Omnicore Agency found that “Half of Pinterest users makes $50K or greater per year, with 10 percent of Pinteresting households making greater than $125K.” Sounds like a multifamily match to us!

4. The Millennials Are Waiting For You

One of our favorite (and most important sayings) is to “Be where your community is.” Well, with 67% of Pinterest users being millennials this social platform holds true to that saying! Millennials are looking to lease longer so it’s important to be where they are, especially when your sales pitch involves strong visuals.

“While millennial renters appear happy with renting year-to-year with their pads, 54% plan to be in their next rented apartment for up to two years – delaying any plans for home ownership.” - RadPad.

By using high-quality visuals and word of mouth referral (repins) you’ll be able to reach more millennials than ever before, and with Pinterest’s higher conversion rate you have the opportunity to convert better than on other social platforms.

Attention spans are fleeting, especially among younger generations, so when any website can hold the attention of users for 15 minutes - you should probably be there to capitalize on that. SocialDraft found that Pinterest users, on average, were spending 15 minutes per visit.

That’s 15 minutes you have to capture a prospect via a compelling photographing, rather than competing with over 1,890 words on just the first page of Google (which can be a little intimidating for a consumer)(Hubspot).

6. Discover What Your Audience Loves

“Twitter is mostly about what I’m doing; Facebook is about who I am; Pinterest is about who I want to be. When you look at what people are pinning, it’s more about who they want to be in the future, which from a marketer’s perspective is a dream come true.” - Daniel Maloney

As marketers, how often do we crave knowing what our audience is dreaming about doing next? Especially when you target audience invented the Hipster it can be hard to follow just where their future selves are headed - enter Pinterest!

In a recent article, Pinterest for Business shared that “66% of Pinners say they use the service to save and collect things that inspire them.” Pinterest is the place to start your market research, develop your renter personas, and help pinpoint where your apartment marketing strategy should be headed.

Pinterest is currently the fourth largest traffic source in the world, according to Businesses Grow. Sound too good to be true? There have been numerous case studies on how unknown bloggers and businesses went from only 100 visits a day (pre-Pinterest) to over 1,000 visits a day (post-Pinterest). Here’s a case study on a few different bloggers that share their secrets to becoming Pinterest successes. 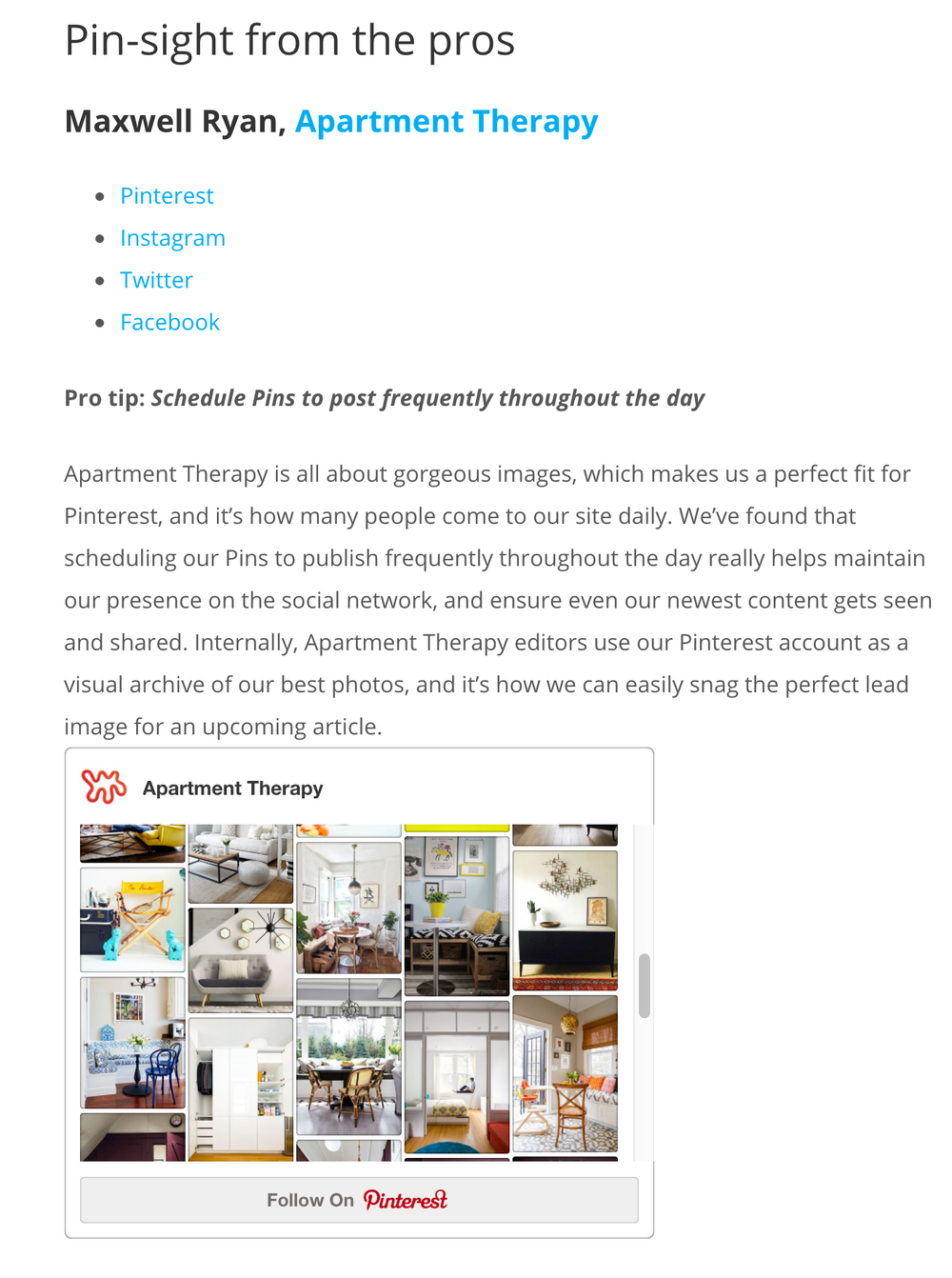 Websites like Real Simple also report the majority of their traffic is from Pinterest, and  A study published by Shareaholic shows that Pinterest drove approximately 7.17% of all social media referral traffic to websites in March 2014 — second place only to Facebook.

8. No Followers? No Problem

Pinterest operates like a search engine so for your content to be seen you don’t need to amass many followers to start seeing results. On Pinterest, the key to success is creating quality pins (vertical, high-quality images, and grade A descriptions) and using the proper keywords to get in front of your audiences.

Many businesses (and bloggers) have started to see a traffic increase by just pinning once a day to their accounts - whether or not they have followers. Unlike Facebook, anyone who searches a term that you optimized for will see your content, not just your followers.

Have you used Pinterest on your phone in the last month? If not, then I calmly urge you to pick up your phone and sign into the app right now. Go on, I’ll wait.

Great are we there? Okay! Now take note of that new camera icon in the upper right-hand corner when you click search. When you select the camera you can point and shoot any item and dozens of suggestions/ideas/ new pins are populated to inspire you. Now, imagine if your community had a board filled with home decor inspiration and ideas, featuring images of those ideas and inspiration displayed in your apartments - it would be a great organic opportunity to get in front of people who have similar tastes!

This past year Pinterest has taken the lead in visual search, but then again having Google’s head of image search be one of the leads for your visual search team tends to help. One of their latest features called Lens, which launched in beta for iPhone and Android last month, invites users to use their camera to snap a photo of a piece of home decor, food, or clothing and start a search.

They aren’t stopping there, another feature release, Shop the Look, has proven to increase engagement by four times in comparison to a normal pin. Shop the Look is a way to allow consumers to make a purchase within Pinterest when they find an outfit suited for the closet or a room they just can't live without!

The final new feature they added to their platform is a way for users to get Instant Ideas while they are searching. Pins will now have little circles in the bottom right-hand corner which users can click to open up a new search related to the pin they selected - this has tripled engagement.

We know it can be intimidating to invest time and money into a new platform, but with Pinterest’s proven track record of consistent growth, engagement, and new traffic opportunity, it seems like a no-brainer to us!

These Stories on Social Media